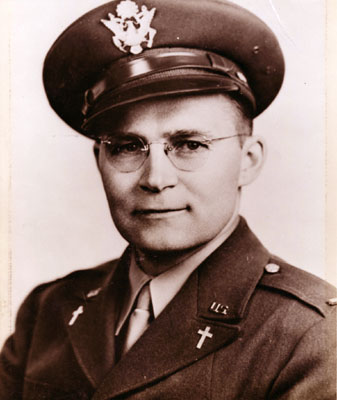 In Swanville, Minnesota on 16 February 1905, two Swedish immigrants had a child named David H. Youngdahl. This young boy would one day enter the ministry and serve his country. It would be a journey that would take him far from his Swedish roots and far from Minnesota. It would be a journey that would end some 38-years later and 500 miles southwest of Iceland in the middle of the cold deadly North Atlantic Ocean.

Little is known of David H. Youngdahl except that he was attending and graduated in 1930 with a Bachelors of Theology degree from the Bethel Theological Seminary in St. Paul, Minnesota. After graduating from Bethel, by April of 1930 he was, according to the Federal Census, a licensed Clergyman in a Baptist Church in New Richmond, Wisconsin. He was at the time 25-years of age and single. This was likely the First Baptist Church in New Richmond and he may have been the Pastor there or may have been an assistant pastor. Within a short time Mr. Youngdahl had moved to the state of Washington where he attended the Seattle Pacific College and earned a B. A. degree in 1933. The following year he again moved, this time to Berkeley, California where he attended the Berkeley Baptist Divinity School, earning a B.D. degree in 1934.

According to the California Voter Register, there was living at No. 15 Dearborn Street a single man named David H. Youngdahl. He was a minister and also listed as a Republican. David Youngdahl would live at No. 15 Dearborn until sometime in 1936 when he moved to No. 32 Dearborn Street. This was due to his marriage to Charlotte C. Bridge, his new wife. On January 22, 1937 a son named Samuel David Youngdahl was born. David, Charlotte and Samuel would live at No. 32 Dearborn at least through 1938 or 1939. On the California Voter Registration list for 1940, David H. Youngdahl is listed alone living back at No. 15 Dearborn Street. It is not known why in 1940 that Charlotte is not listed with David in fact she is not listed at all. David is still on the 1940 Voter list recorded as being a minister. Nothing more is known about Charlotte or her son, Samuel except the last known address of 2104 Hollister Avenue in Santa Barbara, California. This was the address Mr. Youngdahl gave in April 1942 as next of kin when he joined the Army.

As America in December of 1941, entered into the growing war, David H. Youngdahl was called to serve in the Military and on 8 April 1942 entered the army at San Francisco, California. David Youngdahl entered into the Army Chaplain Corps at the rank of First Lieutenant and was given his service number of O448376. He was assigned to the 53rd Field Artillery Regiment then located at Camp Myles Standish, in Taunton, Massachusetts, as Chaplain in early 1942.

Sometime shortly before he was assigned to duty in Iceland, Lt. Youngdahl was promoted to the rank of Captain. His transportation there was to be on the USS Henry R. Mallory. She was a veteran of many wartime crossings, both during the First World War and the present War. Once aboard ship Chaplain Youngdahl could not know that his life would end within days of seeing the Statue of Liberty grow ever faint on the horizon as the Mallory sailed eastward.

It is likely that Chaplain Youngdahl thought he would see combat on the continent of Europe where he would be needed to help his fellow soldiers in battle on the soil of France and Germany. But Chaplain Youngdahl’s battlefield was the very ship he was sailing in. It was a battle in which he would not be able to leave with his life for at 0358 hours on Sunday morning February 7, 1943 the battle came to the men aboard the Mallory. There were 7 Chaplains aboard the Mallory this trip and the Chaplain’s would render much needed aid and comfort to the men aboard the doomed Mallory. Only two Chaplains would survive the day. Captain David H. Youngdahl would not be among the two Chaplains saved and the exact moment that his life ended is not known, but his body was not recovered.

The angry icy waters of the North Atlantic claimed her quota that day. According to rescue reports from the Coast Guard Cutter USCGC Bibb, there simply was not enough time to gather all the dead bodies in the water. The Bibb’s Captain had to give the unthinkable order that dead men were not to be brought aboard due to the fact that German U-boats were still in the area and as the Bibb lay still picking up living survivors she was an inviting and easy target for the Germans, which would have made for an even larger disaster then was before them at that moment had the Bibb been torpedoed herself.

Back in Santa Barbara, California on 3 August 1943 a letter from the Chief of Chaplains arrived at 2104 Hollister Avenue. Charlotte C. Youngdahl opens and reads for the first time that her husband and father to her son Samuel, was killed in action aboard the ship he was traveling on. Captain David H. Youngdahl, O448376, Northern Baptist Chaplain, US Army Chaplain Corps was awarded the Purple Heart Posthumously on 9 August 1945 and his name appears on the monument in Cambridge, England inscribed with the names of the men Missing in Action or Lost at Sea.